Warner Bros. has unveiled a new trailer for The Matrix Resurrections, and although much of the plot is still secret, it seems as if Carrie-Ann Moss‘ Trinity will prove as vital to the human resistance against the machines as Keanu Reeves‘ Neo was in the first three films.

“She believed in me,” Reeves’ Thomas Anderson/Neo says in the trailer. “It’s my turn to believe in her.”

Like Neo was in the original films, Trinity seems to be in God mode once she snaps into the virtual reality of the Matrix; this time around, we see her character having an awakening similar to Anderson’s, realizing the world she occupies isn’t real.

We also get a peek at Jonathan Groff‘s take on the machines’ enforcer Agent Smith; the Mindhunters veteran replaces Hugo Weaving as the fearsome, suited baddie.

The trailer also gives some peeks of some set piece action scenes, from rooftops, to a speeding bullet train. And of course, there’s some reality-bending martial arts action, including a scene where Reeves blasts a bad guy through the air with a wave of energy. 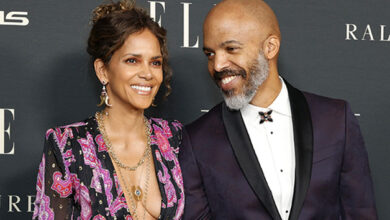 Shonda Rhimes’ ‘Bridgerton’ has a debut fit for a king, according to Netflix