A new trailer for Disney+’s upcoming The Book of Boba Fett series hints at an important chapter: How he cheated death after the events of 1983’s Return of the Jedi.

As most Star Wars fans can tell you, Fett ended up in the belly of a sandpit-dwelling creature known as a sarlacc, as the heroes escaped the clutches of Jabba the Hutt in that film. But The Mandalorian brought Boba back from the dead, and Star Wars prequel star Temuera Morrison to fill his spike-tipped boots.

Some glimpses in the new trailer shows we might get to see how he escaped. Morrison is shown submerged in a healing fluid filled bath known as a bacta tank — the same therapy Luke Skywalker used after his run-in with a wampa in The Empire Strikes Back — and the new clip hints the desert planet’s natives, the Sand People, might have scooped him up when he was “left for dead in the sands of Tatooine.”

As previously reported, The Book of Boba Fett will track Boba’s rebirth from bounty hunter to crime lord, taking over Jabba’s empire.

Incidentally, Star Wars creator George Lucas has admitted regret in unceremoniously “killing off” Boba, not knowing at the time the character would become a fan favorite — despite having just four lines of dialog between The Empire Strikes Back and Return of the Jedi.

The Book of Boba Fett debuts on Disney+ December 29. Disney is the parent company of ABC News. 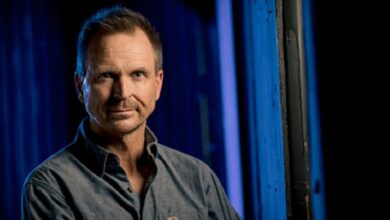