Ryan Reynolds was just given his native Canada’s Governor General honor, and to mark the occasion, fellow Canadian and Barenaked Ladies singer Steven Page — along with seemingly all of the Great White North — sung the actor and entrepreneur’s praises.

Officially, the award from the country’s National Arts Centre, “recognizes work of an extraordinary nature and significance in the performing arts by an individual artist…”

In a split-screen Instagram video, Ryan is seen wearing the medal, and reacting to Page’s video tribute, the chorus of which is, “Canada loves you back.”

A tearful Ryan watches the video, and laughs along with Page’s lyrics, which call the Deadpool star, “A genuine Canadian icon, like Shatner and Alex Trebek.”

Also giving to Canadians’ penchant for self-deprecation, the song notes, “of all the Canadian Ryans, you’ve got to be in the top 3.”

The video features clips from everyone from hockey players to those benefitting from Reynolds’ charitable initiatives, all singing along, along with postcard-perfect shots of the country.

He added, “Also, it’s worth noting @stevenpage is not only a friend but an absolute legend. He wasted this perfectly awesome song on me.”

Ryan thanked those in the National Arts Centre, “for keeping the performing arts alive and well throughout Canada and being a champion for voices which have been historically silenced or overlooked.”

Incidentally, when one fan noted that Reynolds’ pal and frequent fake foil Hugh Jackman doesn’t have his own song in his honor, Ryan replied, “Hugh Jackman IS his own song.” 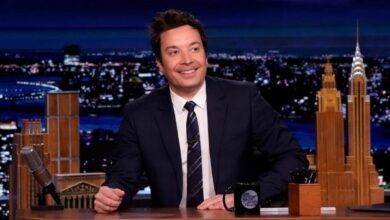