Sony dropped the footage Spider-Man fans were waiting for Tuesday night, more or less, in the trailer to Spider-Man: No Way Home.

As we learned from the teaser, Tom Holland‘s Peter Parker is on the run, and has teamed up with Benedict Cumberbatch‘s Doctor Strange for a spell to make people forget he’s Spider-Man. Except the spell rips open the multiverse.

A bunch of former Spider-Man villains come tumbling out — but they’re not villains that Holland’s Spidey has faced.

However, here’s who you didn’t see: Tobey Maguire and Andrew Garfield, the two actors whose respective Spidey alter-egos fought those baddies in previous films.

It had been widely reported that Maguire appears in the film, and it’s thought Garfield is too — despite his frequent denials.

But they’re nowhere to be found in the trailer. There IS another Spidey shown in the trailer, but his black and metallic outfit doesn’t reveal his identity — and it’s not a suit we’ve seen before.

However, speculation began immediately Tuesday night that Sony and co-producers Marvel Studios might just be pulling a fast one. Marvel Studios has digitally removed characters in other trailers to preserve surprises.

Fans might have to wait and see: Spider-Man: No Way Home opens December 17. 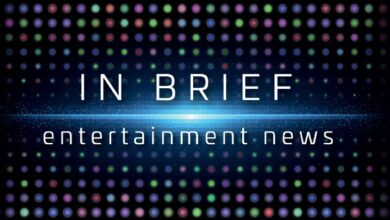 'In the Heights' debuts two trailers; Lin-Manuel Miranda is holding out “hope” for a big-screen event Celebs rally to save the Oxford house in which J.R.R. Tolkien wrote ‘The Hobbit’ and ‘The Lord of the Rings’