Reality competition shows have become popular primetime television entertainment over the past decade.  Sandwich King star Jeff Mauro says he knows why those shows are a recipe for success.

Mauro explained to ABC Audio how Food Network series such as Chopped — or his own, Kitchen Crash — became staples on the network he’s called home for decades.

“People love to be critics and judges in their home,” the chef said, noting how American watchers have transitioned from passive to active spectators. “It’s so funny how people are, like, ‘What you made wasn’t good! You didn’t deserve to win that!’ Without ever having a bite of it. It’s crazy where you can kind of judge somebody… via your couch.”

Mauro added that reality competition shows create an experience for the audience, which includes “living vicariously through… the judges” to gain a sense of how everything tastes.

The chef, who’s a paid spokesperson of gourmet dog food Caesar’s Bestie Bowls, says the transition is fueled by the audience’s love to watch food being made.

“We love to see people really dip into their resources to create something really special.  That — with the help of unbelievable crews and cameramen and descriptive judges — you can almost taste it from home,” he said.

Speaking of spectators, Mauro noted of another popular form of entertainment taking over social media — reaction videos. “Nothing’s safe from commentary these days,” he chuckled, admitting online critics have even used him as fodder.

Recalling Kalen Allen‘s viral reaction to the “bougie” mac & cheese made on his other show, The Kitchen, Mauro praised the “funny” and “wonderful” video.

“[He] introduced us to millions more people,” Mauro explained, and revealed that he learned something very important from Kalen’s brutally honest feedback: “I would never make that [mac & cheese] again!” Movie theaters, theme parks and other venues could be fully operational by June 15, says California's governor 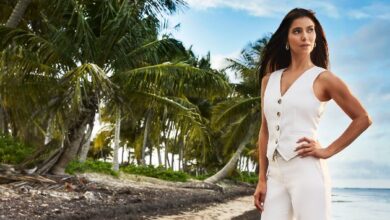