(WASHINGTON) — President Joe Biden announced on Thursday the first details of the U.S. sending 80 million COVID-19 vaccines overseas with the aim of “ending the pandemic globally.”

The Biden administration has been under pressure to provide other hard-hit nations with some of its abundant supply and National Security Adviser Jake Sullivan said at a White House briefing that some of the initial doses would go to India, Gaza and the West Bank and other nations and areas he said were “facing crises.”

White House Coronavirus Response Coordinator Jeff Zients said the donations would be “surplus” from the supply the U.S. needs and would include the FDA-approved Pfizer, Moderna and Johnson & Johnson vaccines, but not the Astra Zeneca vaccine.

“Today, we’re providing more detail on how we will allocate the first 25 million of those vaccines to lay the ground for increased global coverage and to address real and potential surges, high burdens of disease, and the needs of the most vulnerable countries,” Biden said in a statement.

“At least 75 percent of these doses — nearly 19 million — will be shared through COVAX, including approximately 6 million doses for Latin America and the Caribbean, approximately 7 million for South and Southeast Asia, and approximately 5 million for Africa, working in coordination with the African Union and the Africa Centres for Disease Control and Prevention. The remaining doses, just over 6 million, will be shared directly with countries experiencing surges, those in crisis, and other partners and neighbors, including Canada, Mexico, India, and the Republic of Korea,” he said.

At Thursday’s COVID-19 briefing following the announcement, Zients said, “As the days get brighter and brighter at home, we’re focused on driving progress to help the pandemic — help end the pandemic around the globe. It’s both the right thing to do and an important step in protecting Americans by helping to stamp out the virus. The president has committed that the U.S. will be an arsenal for vaccines.”

COVAX, or COVID-19 Vaccines Global Access, is a World Health Organization-backed global vaccine program helping with the distribution, but Sullivan added at the briefing that the U.S. will have a final say on where the doses go and its effort is focused on countries dealing with “urgent” needs.

“We will retain the say as to where they go,” Sullivan said. “Ultimately the United States will have the authority to say the doses are going here as opposed to there.”

He emphasized Biden’s point that the U.S. is not “extorting or asking concessions or imposing conditions,” and included an apparent slight, “the way other countries who are providing doses are doing.”

“We are doing none of those things. These are doses being donated free and clear to these countries for the sole purpose of improving the public health situation,” he said.

“We’re not asking anything of the people of Gaza and West Bank, but we feel that given what they are dealing with in the situation on the ground there, it is only right and proper and good for the United States to actually allocate some doses to that country,” he said.

Zients highlighted one million doses of the Johnson & Johnson vaccine were headed for South Korea in a matter of hours.

“After making a 2,000-mile journey to California, these one million doses are being loaded into a plane that will take off for the Republic of Korea this evening, carrying hope and bringing life-saving protection to the one million South Koreans who have already signed up to get a shot,” he said.

Biden’s statement reminded that his administration supports efforts to temporarily waive intellectual property rights for COVID-19 vaccines and that the U.S. has already shared more than 4 million doses of vaccine with Canada and Mexico.

The president spoke on the U.S. vaccination effort Wednesday, calling on Americans to participate in a “month of action” to reach 70% of American adults vaccinated by July Fourth. His statement Thursday on vaccines abroad comes as he celebrates first lady Jill Biden’s birthday in Rehoboth Beach without big, public plans on their schedule.

Secretary of State Antony Blinken on Tuesday declined to offer specifics ahead of the president but said their distribution was intended to “focus on equity, the equitable distribution of vaccines.”

“We will focus on science,” he told reporters on the effort while on a trip to Costa Rica.

The administration plans to send at least 80 million doses overseas by the end of the month. Siberian wildfires now bigger than all other fires in world combined 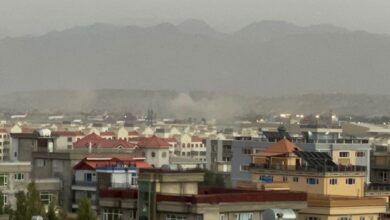 Afghanistan updates: US evacuations continue despite threats of more attacks