Other than a special appearance at his friend’s funeral in Australia last month, Ed Sheeran‘s pretty much been staying out of the limelight.  However, the British tabloid The Sun is running pictures that seem to indicate the record-breaking superstar is ready to return.

The Sun has photos of Ed on what it says is a music video set in North London.  His hair is bleached blonde and spiked, and he’s wearing a pink suit, ghoulish makeup and fangs, indicating that he’s playing some sort of vampire. There are also photos of Ed looking more like his normal self, sitting on a rooftop with his guitar.

“There were quite a lot of fans later on and security were a bit anxious but he just knew how to do it,” an onlooker told The Sun. “He posed for a few photos and then politely said he had to get back to work.”

“At times you could hear music playing, which sounded great, but it wasn’t something I’d heard before,” added the onlooker.

Aside from the release of his single, “Afterglow,” over Christmas, Ed’s essentially been on a break since December of 2019.  He and his wife Cherry Seaborn welcomed their daughter, Lyra Antarctica Seaborn Sheeran, last year. 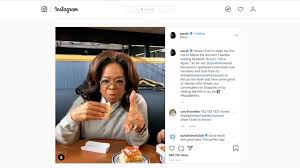 Oprah Was In Maine!