Adepero Oduye says her character Sarah Wilson is the unfiltered voice of reason in the Disney+ series The Falcon and the Winter Soldier.

Oduye tells ABC Audio that playing the sister of Anthony Mackie‘s Sam Wilson/The Falcon offers her certain allowances that others in his life simply don’t have.

“I love that that was… the dynamic. That she is that person for him… unfiltered in a way that only a sibling could [be],” she says. “Like siblings can kind of talk crazy to you, and you’re not going to just write them off. You maybe will be annoyed by it, but it’s coming from love.”

For Oduye, that type of tough love hits close to home.

“I know that in my life, it might be a little bit uncomfortable to hear that,” she admits. “But at the end of the day, you’re always thankful.”

In fact, the U.K. actress believes that Sam — and everyone else for that matter — needs people “who are going to give you the real no matter what.”

“Who are going to question your choices, or your thought process,” Oduye explains. “And are really going to push you and not just… keep silent.”

Oduye says for Sam, those people will be pivotal in his decision to take up the Captain America mantle.

“And so I think it’s just realistic coming from where he comes from, a community, and a family such as a family that he has [that] he’s going to have people around him who’re going to say, ‘Listen, look at where we are. What does it really mean to represent this country?'”

The finale of of The Falcon and the Winter Soldier drop Friday on Disney+. 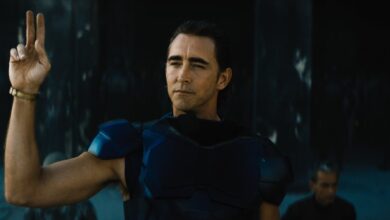