(LONDON) — House Speaker Nancy Pelosi on Monday rejected GOP claims Democratic Rep. Maxine Waters was “inciting violence” when she said in Minnesota over the weekend that protesters need “to get more confrontational.”

House Republican Leader Kevin McCarthy said over the weekend he would be forced to take action against her if Pelosi failed to punish Waters herself.

“Maxine Waters is inciting violence in Minneapolis — just as she has incited it in the past,” McCarthy said in a tweet late Sunday evening. “If Speaker Pelosi doesn’t act against this dangerous rhetoric, I will bring action this week.”

Waters, 82, joined protesters in Brooklyn Center – a suburb of Minneapolis – on Saturday for the seventh night of demonstrations following the death of Daunte Wright, a 20-year-old Black man who died earlier this month when a white Minnesota police officer fatally shot him.

His death sparked days of protests in the Minneapolis suburb, as the murder trial for another police killing of an unarmed Black man — George Floyd — is getting close to ending just a few miles away. Closing arguments in the trial of Derek Chauvin, the former Minneapolis police officer accused of murdering Floyd, began on Monday and the jury may reach a verdict as soon as this week.

The congresswoman on Saturday said she was “going to fight with all of the people who stand for justice” and urged others to do the same, saying, “We’ve got to get justice in this country, and we cannot allow these killings to continue.”

ABC News has reached out to Waters’ office for comment.

Pelosi defended Waters on Capitol Hill on Monday, telling reporters she does not believe Waters needs to apologize for her comments.

“Maxine talked about confrontation in the manner of the Civil Rights movement. I myself think we should take our lead from the George Floyd family. They’ve handled this with great dignity and no ambiguity or lack of misinterpretation by the other side,” Pelosi said.

Asked if she believed Waters’ comments have incited violence as Republicans have suggested, Pelosi responded: “No, absolutely not.”

Republicans have pounced on Waters’ comments and accused her of engaging in dangerous rhetoric.

McCarthy could introduce a privileged resolution to censure Waters on the House floor, but it’s not expected to pass if no Democrat supports the measure.

GOP firebrand Rep. Marjorie Taylor Greene said she would introduce a resolution to expel Waters from Congress over her comments.

“As a sitting United States Congresswoman, Rep. Maxine Waters threatened a jury demanding a guilty verdict and threatened violence if Chauvin is found not guilty,” Green said. “This is also an abuse of power.”

“Very soon I’ll be introducing a resolution to expel [Rep. Maxine Waters] from Congress for her continual incitement of violence on innocent American people,” she tweeted. “Rep Waters is a danger to our society.”

A freshman member from Georgia, Greene herself has a long record of making incendiary remarks ranging from allegedly supporting violence against Pelosi and Democrats, to spreading baseless claims that mass school shootings were staged.

The House approved a resolution in February that removed the embattled congresswoman from her assigned committees.

Waters has long had a reputation for outspoken advocacy on behalf of women, children, and other minorities in her more than 40 years of public service, according to her congressional biography.

Waters is well-known for her candid and direct remarks and was one of the first members of Congress to call for former President Donald Trump’s impeachment.

She became engulfed in a feud with Trump in 2018 after she called on her supporters to publicly confront and harass members of the Trump administration in response to the zero tolerance immigration policy that led to thousands of children being separated at the U.S. border.

“If you see anybody from that Cabinet in a restaurant, in a department store, at a gasoline station, you get out and you create a crowd. And you push back on them. And you tell them they’re not welcome anymore, anywhere,” Waters said.

At the time, Waters maintained she did not intend to incite violence by her comments and said Trump and others were deliberately mischaracterizing her words.

“Your time has expired, sir,” Waters told Jordan as he continued to press Fauci, who was testifying before the panel.

“You need to respect the chair and shut your mouth,” Waters said to Jordan.

She explained her outburst during an interview with MSNBC on Sunday. 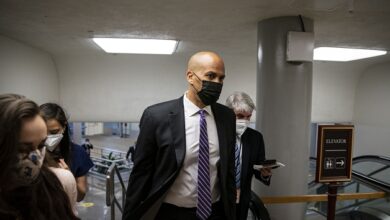 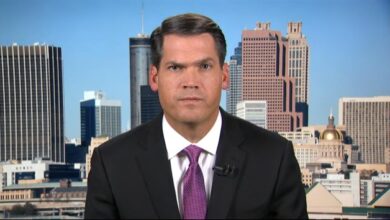 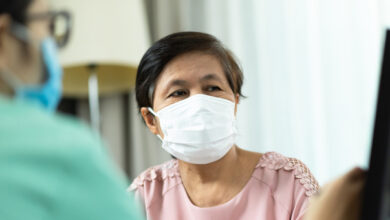 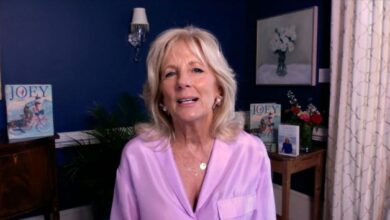 Dr. Jill Biden responds after op-ed called for her to drop ‘doctor’ from name