(WASHINGTON) — Rep. Mo Brooks announced his 2022 campaign for Alabama’s Republican Senate primary on Monday, invoking former President Donald Trump while he continued to peddle conspiracies of mass election fraud and pledged to a crowd of supporters that he’ll be the “only candidate” in the race “with a record of proven conservative leadership that Alabama voters can see and trust.”

“President Trump can vouch, I don’t cut and run. I stand strong when the going gets tough. That is why I have been twice endorsed by President Trump for election. I fought with President Trump for the Make America Great Again agenda and for the wall on our southern border,” Brooks said. “No other candidate for the United States Senate can say that.”

Brooks, who currently represents Alabama’s 5th Congressional District, made the announcement at a rally in Huntsville alongside former Trump senior adviser Stephen Miller, who “proudly” endorsed Brooks, saying “nobody over the last four years has had President Trump’s back more than Mo Brooks” and that he envied Alabamans’ opportunity to vote for him.

GOP Sen. Richard Shelby, 86, announced on Feb. 8 that he would not seek a seventh term as Alabama’s senior senator, giving other Republicans the chance to vie for the seat in the solidly Republican state that voted to reelect Trump by a 25-point margin.

Miller and Brooks, both immigration hardliners, blasted Democrats over the immigration crisis at the southern border.

“America is nothing without borders. … Rather than secure America’s borders, socialist Democrats dismantled them with deadly effect,” Brooks said.

They also framed Brooks’ campaign as the firewall against an “attack” on America’s founding principles.

“America is not great because we’re lucky. I would submit that we’re great because of our foundational principles,” Brooks said. “But today, those very foundational principles that have made us who we are, they’re under attack. For the life of me, I don’t understand it but they are under attack on a daily basis. And quite frankly, I have never feared for America’s future like I fear for America’s future today.”

Brooks was one of the leading members of Congress standing behind Trump’s effort to overturn the 2020 presidential election that he lost. In a December interview with ABC News, Brooks echoed the former president’s baseless claims of mass voter fraud, claiming “if the vote count was limited only to lawful votes cast by eligible American citizens,” Trump would’ve won reelection.

Prior to his interview with ABC News, Brooks announced he planned to object to Congress counting the electoral votes in several states President Joe Biden won and that Trump was contesting. After a mob of rioters stormed the U.S. Capitol on Jan. 6 attempting to stop Congress from fulfilling its constitutional duty certifying Biden’s victory, Brooks still objected to Arizona and Pennsylvania’s electoral votes being counted.

At the rally Monday in Huntsville, Brooks touted his objections and again — despite the evidence to the contrary — claimed, “In 2020, America suffered the worst voter fraud and election theft in history.”

At Trump’s request, Brooks spoke at the “Save America” rally in January that preceded that deadly insurrection, and at one point during his remarks, Brooks said, “Today is the day American patriots start taking down names and kicking ass.”

Two of Brooks’ Democratic colleagues introduced a resolution to censure Brooks over his comments at that rally, alleging he “encouraged and incited violence against his fellow Members of Congress.” Brooks rejected the premise of the resolution, asserting that his remarks were “clearly designed to reinvigorate people for the 2022 election cycle.”

This is not Brooks’s first attempt to represent Alabama in Congress’ upper chamber. In 2017, he unsuccessfully ran in the special election to replace former Sen. Jeff Sessions, Trump’s first attorney general. Receiving just 20% of the vote, Brooks came in third in the primary and did not advance to the runoff. Former Judge Roy Moore went on to win that runoff but ultimately lost to former Democratic Sen. Doug Jones after his campaign was rocked by several women accusing Moore of engaging in sexual misconduct decades ago, which he denied.

The 66-year-old congressman is the second pro-Trump Republican to launch a campaign, joining Lynda Blanchard, an Alabama businesswoman and lifelong resident who served as an ambassador during the latter half of Trump’s tenure. She announced her campaign on Feb. 18, promising to “advance President Trump’s #MAGA agenda” and touting Trump’s decision to tap her as the ambassador to the former first lady’s home country, Slovenia.

The “civil war” between the pro-Trump and establishment wings of the GOP may escape Alabama’s Senate primary, with the lead up to the primary instead being defined by candidates trying to prove to voters that they are the most loyal to the popular, former president and the “America First” agenda he championed.

Unlike in Georgia, where strategists argued that sort of GOP infighting hurt former Georgia Sen. Kelly Loeffler in her unsuccessful runoff campaign against now-Sen. Raphael Warnock, Alabama’s a Republican stronghold. Absent a similar scandal like the one Moore faced in 2017, a Democrat winning this election is more than unlikely. All three major race raters — Cook Political Report, Sabato’s Crystal Ball and Inside Elections — say the seat is safely Republican at this point. 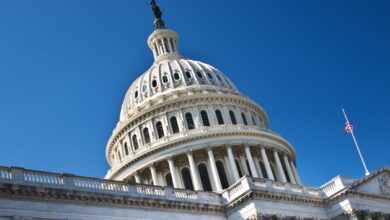 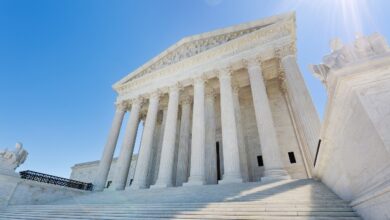 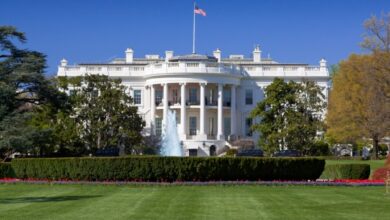 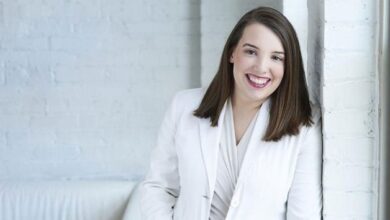