ABC (TEXAS) — Could we be calling him Governor Matthew McConaughey in the future?  The Dallas Buyers Club star let it slip on Wednesday that he is considering throwing his hat into Texas’ gubernatorial race next year.

During his appearance on The Balanced Voice podcast, the 51-year-old McConaughey reflected on how he sees himself as a leader.

Said the Oscar winner, “I’m looking into now again, what is my leadership role? Because I do think I have some things to teach and share, and what is my role? What’s my category in my next chapter of life that I’m going into now?”

McConaughey allowed that, while he “still feel[s] very much like a peer,” that he has come to understand that he has “wisdom to share.”

The Greenlights author says his time teaching at Texas’ Moody College of Communication as part of the Department of Radio-Television-Film opened his eyes.

McConaughey says he’s shared his life experiences and learnings “that I think is obvious” with his students, of which he quickly learns they “had no idea.”

Because of the impact he’s leaving, he added that he is “stepping into more leadership… teaching positions.”

When pressed by the host, Crime Stoppers CEO Rania Mankarious, about whether or not his upcoming leadership roles involve a run for governor of Texas, of which current Gov. Greg Abbot is up for reelection in 2022, McConaughey confirmed, “It’s a true consideration.”

The actor also shared his “three epics” that make up the backbone of his life, which he reveals are his three children — Levi, 12, Vida, 11, and eight-year-old Livingston — of whom he shares with wife Camila Alves.

He says his children are “the greatest light or shadow that Camila and I can leave [behind.]” 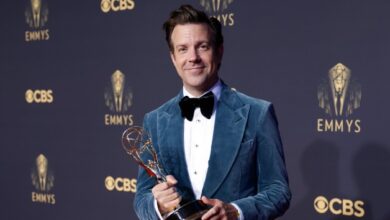 Could Jason Sudeikis return to 'SNL' as the first host of the new season? Vin Diesel marks 20 years of ‘The Fast and the Furious’