(WASHINGTON) — Days after he held up the passage of President Joe Biden’s coronavirus relief bill on the Senate floor, Sen. Joe Manchin, D-W.Va., said Sunday that Biden will not have to cater to him in the evenly divided Senate as the president tries to enact his agenda.

“I didn’t lobby for this position,” Manchin told ABC’s “This Week” Co-anchor Martha Raddatz. “I’m the same person I have been all my life. And since I’ve been in the public offices, I’m the same. I’ve been voting the same way for the last 10 years. I look for that moderate middle. The common sense that comes with the modern middle is who I am. That’s what people expect — my state of West Virginia — they know me. They know how I’ve governed — I tried to basically represent them and the best of my ability.”

Manchin said that lawmaking is more difficult when trying to push back against partisanship, but the middle ground is the best place to work from.

“You’ve got to work a little bit harder when we have this toxic atmosphere, and the divisions that we have, and the tribal mentality — Martha, that’s not to be acceptable. You’ve got to work hard and fight that fight against those urges,” he added. “I always want that moderate middle to be able to work and that’s where you govern from. That’s where you run your life from.”

Raddatz pressed Manchin on his stance about unemployment benefits in the midst of a pandemic. The Department of Labor announced Friday that the unemployment rate dropped to 6.2%, falling by a fraction of a percentage. The pre-pandemic rate was 3.5%.

“Senator, you brought the Senate to a standstill for 10 hours on Friday, threatened to side with Republicans and did not budge until a call from the president and significant concessions were made. In the end you got $300 a month instead of $400 for benefits. So in this pandemic economy, you don’t think people need more money?” she asked.

Manchin, a moderate Democrat who largely steered the debate surrounding the massive coronavirus relief plan, told Raddatz he was trying to find middle ground in an attempt to garner more bipartisan support for the plan.

“I didn’t do anything intentionally whatsoever,” Manchin said. “I did everything I could to bring us together so we’d have more support and the public would get the needed help, as needed. We have so many different ways that we’re helping the public with this piece of legislation.”

Manchin said dropping the amount down to $300 would allow for systems to stay in place so payments would not be interrupted and Americans wouldn’t be without checks.

“Also, Martha, this was a targeted piece of legislation. It was because people need the help and we helped every scenario,” he added.

Raddatz challenged Manchin on the idea of bipartisanship, given that the relief package passed the Senate Saturday afternoon along party lines.

“Senator, we know you are all about bipartisanship but President Biden did not get a single Republican vote for a relief package in the middle of a pandemic. So at this point doesn’t bipartisanship seem like a false hope?” she asked.

“Not at all Martha,” Manchin said. “We had an awful lot of input from Republican friends all through this process. A lot of the changes that we made that were basically brought into this process, came by working with my Republican and Democrat colleagues together. There were about 20 of us that worked continuously, so they had tremendous amount of input, they just couldn’t get there at the end. And President Biden encouraged them to be involved, all the way through. He spoke to them all the way up to the end.”

Manchin also said he knows in his heart that the president will continue to reach out to Republicans because “that’s just who he is.”

Manchin has also been vocal about his resistance to raising the federal minimum wage to $15 an hour, spearheaded by progressive Sen. Bernie Sanders, I-Vt., and supported by Biden. White House press secretary Jen Psaki said this week that the administration will continue fighting for that federal raise.

“We agree with Sen. Sanders and the president is going to be standing right alongside him fighting for an increase in the minimum wage to $15 an hour, and he will use his political capital to get that done,” Psaki said.

Raddatz challenged Manchin Sunday on the future of the federal minimum wage, given that he could bring that effort to a halt.

“You have your own proposal to increase the minimum wage to $11, so is Joe Biden wasting his political capital on you to get to $15?” she asked.

“Not at all. President Joe Biden knows how to get the deal done. And the bottom line is there is not one senator out of 100, that doesn’t want to raise the minimum wage — $7.25 is sinfully low, we must raise it. I agree with President Biden when he says, if you go to work every day you should be above the poverty guidelines,” Manchin said. “Well, the poverty guidelines should be above that if you’re going to work, and working full time — should be at $11 base. That should be your base and then we index it with inflation, to make sure it never gets back in this political conundrum we have right now. It shouldn’t be a political football.”

Raddatz also asked Manchin, a former governor, about New York Gov. Andrew Cuomo, who is embroiled in a scandal amid allegations of inappropriate conduct and an ongoing investigation into how his administration handled nursing home COVID-19 death data. Cuomo is facing bipartisan calls to resign as the state attorney general leads an independent investigation into the sexual harassment claims that he has denied.

Manchin said it is too early to say whether the governor should resign.

“These are serious allegations. I understand there’s an investigation and we should wait until the investigation is finished. I’ve seen a rush to judgment before. And I think the investigation should proceed and make a decision later and that’s what I would hope everyone would do and allow this process to go through,” Manchin said. “Allow the investigation to be completed. Allow the person to be defend themselves and tell their story, too.” 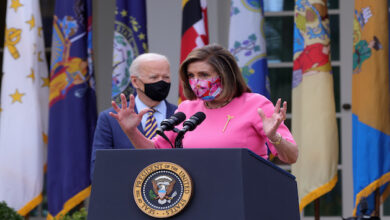 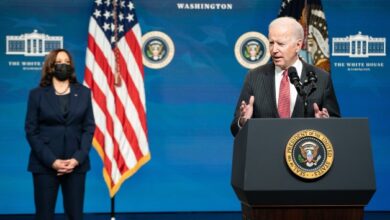 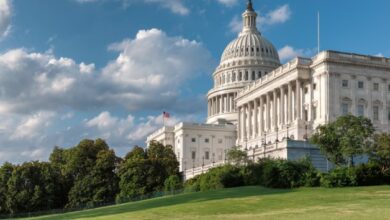 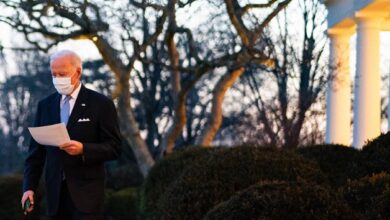