(WASHINGTON) — President Donald Trump is slated to hand over control of the White House to President-elect Joe Biden in five days.

The House of Representatives on Wednesday voted to impeach Trump on on article for “incitement of insurrection” for his role in the Jan. 6 attack on the U.S. Capitol — making him the only president to be impeached twice.

While she was not expected to join the administration and instead return to her communication’s firm SKDKnickerbocker, Anita Dunn will be serving as a senior adviser to the president — marking yet another longtime Biden adviser and a member of the highest echelons of his campaign joining the White House in a senior role.

Biden’s campaign photographer and videographer will also take on similar roles in the administration.

The House of Representatives’ Committee on Oversight and Reform has sent letters to two dozen hotels and private travel companies seeking help in identifying rioters and preventing future attacks in Washington, D.C., ahead of Biden’s inauguration.

“While the inciters and attackers bear direct responsibility for the siege on the Capitol and will be held fully accountable, they relied on a range of companies and services to get them there and house them once they arrived—companies that law-abiding Americans use every day, but whose services were hijacked to further the January 6 attacks,” committee chairwoman Rep. Carolyn Maloney, D-N.Y., wrote in the letters. “Trump supporters chartered scores of buses and vans and drove in caravans to the nation’s capital. They stayed in D.C. hotels, with videos showing attackers relaxing in the lobby of one hotel after the insurrection.”

The committee has asked the businesses — ranging from major hotel chains to bus and car rental companies — to retain records of January reservations for future congressional investigations, to put in place additional screening measures “to ensure that your services are not being used to facilitate violence or domestic terrorism,” and to provide information to the committee by Jan. 29 on those measures.

Jan 15, 8:54 am
FBI warns of possible explosives at expected protests linked to inauguration

The danger to the public and to law enforcement officers from explosive devices during expected upcoming protests “is substantial,” the Federal Bureau of Investigation warned in a new awareness bulletin obtained by ABC News on Friday.

The document is full of photos of devices used in the last eight months against civilian and law enforcement targets during public demonstrations.

The FBI now wants to make first responders aware of what has been deployed in the past and what they might encounter during protests linked to the presidential inauguration on Jan. 20.

“The danger posed to law enforcement officers and the general public from the all the tactics listed is substantial,” the bulletin states. “If a suspicious item is reasonably believed to contain explosives, an IED, or other hazardous material, DO NOT touch, tamper with, or move the item. Only bomb disposal personal should handle any suspected devices that are located.”

An internal FBI bulletin obtained by ABC News earlier this week stated that armed protests are being planned at all 50 state capitols as well as at the U.S. Capitol in Washington, least through Inauguration Day.

The warning comes after suspected pipe bombs were found last week outside both the Democratic National Committee and the Republican National Committee headquarters, just a few blocks from the Capitol where pro-Trump rioters stormed the building.

Kessler, a pediatrician and lawyer who headed the FDA from 1999 to 1997 under the Bush and Clinton administrations, will replace Dr. Moncef Slaoui, who is the current chief science officer to Operation Warp Speed.

“We are in a race against time, and we need a comprehensive strategy to quickly contain this virus,” the president-elect said in a statement Thursday. “The individuals announced today will bolster the White House’s COVID-19 Response team and play important roles in carrying out our rescue plan and vaccination program. At a time when American families are facing numerous challenges I know these public servants will do all that is needed to build our nation back better.”

With just five days until his inauguration, Biden announced Thursday his pick to head the Federal Emergency Management Agency (FEMA) along with several other key posts for his incoming administration.

“These dedicated and distinguished leaders will bring the highest level of experience, integrity, and knowledge to bear on behalf of the American people,” Biden said in a statement Thursday. “Each of them brings a deep respect for the civil servants who keep our republic running, as well as a keen understanding of how the government can and should work for all Americans. I am confident that they will hit the ground running on day one with determination and bold thinking to make a meaningful difference in people’s lives.”

Alex Padilla, California’s Secretary of State and the man who will fill Vice President-elect Kamala Harris’ seat in the Senate, told ABC News he’s prepared to balance both the impeachment trial and response to COVID-19 when he’s sworn in next week.

“We have to be able to walk and chew gum at the same time,” Padilla said. “It’s not either or, COVID-19 response is absolutely important. Holding President Trump accountable is extremely important. And doing our part, as the Biden-Harris administration settles, is also extremely important. So we’re prepared to do what it takes.”

“There has to be accountability, nobody is above the law.”@AlexPadilla4CA, U.S. Senator Designate for California, joins @ABCNewsLive to discuss impeachment and the COVID-19 pandemic. https://t.co/d08otzkRdW pic.twitter.com/9j95A4SCaQ

He said he doesn’t know how the Senate will vote, but believes a “rebalanced leadership” with Democrats in the White House, Senate and House, will give the party “tremendous opportunity” to achieve their goals.

When asked whether he believes last week’s riot at the Capitol would embolden further attacks, he said, “Frankly, when I saw the images last Wednesday, it only emboldened my resolve to want to get to work, and want to get to work quickly.”

Virginia Gov. Ralph Northam said he sent 2,000 National Guardsmen and hundreds of state police to help stop the president’s supporters from rioting at the U.S. Capitol during a joint session of Congress last week.

Now, with Biden’s inauguration just days away, he said his state is prepared to ensure a peaceful transition of power in Washington, D.C., and ready to face any other threats that might emerge after multiple recent reports of threats at capital buildings throughout the country.

“Unfortunately, we have experience here in Virginia,” Northam told ABC News’ Linsey Davis. “We had the riots in Charlottesville back in August 2017, and then we had a lot of armed protesters in January (2020), and so, we have some experience.”

“Words have meaning, and our leaders need to be very careful with how they message to those that support them.”@GovernorVA Ralph Northam joins @ABCNewsLive to discuss security precautions Virginia is taking following U.S. Capitol siege. https://t.co/d08otzkRdW pic.twitter.com/M9FRYQlRse

With fences posted around the state’s capital building and windows boarded up, Northam said it’s “an unfortunate situation, but we’ve made it known to these individuals that if they come here looking for trouble, that we’re ready and the outcome is not going to be good for them.”

Northam said that the riot at the Capitol has also impacted his state’s ability to vaccinate people for the coronavirus.

“It’s unfortunate that we’re having to use the resources that we are (using),” he said. “We’re in the middle of a pandemic. … The Guardsmen, they’ve been very involved with our testing and now our vaccination program. We’d like to have them doing that, but instead, we have a president that has incited violence and we need to protect the country.”

Biden outlined the major points of his rescue plan: a $1.9 trillion proposal that includes a nationwide vaccination program, $1,400 checks for individuals, an extension and expansion of unemployment benefits and help for struggling communities and businesses.

Biden placed particular emphasis on housing and food insecurity and spoke about expanding SNAP benefits. He said his policy plan would extend the eviction and foreclosure moratorium, potentially previewing an executive action we could see next week. He also asked Congress to appropriate funds for rental assistance.

Biden, who preached bipartisanship while on the trail, said both he and Vice President-elect Harris had spoken with officials, mayors, and governors of both parties on a regular basis to address the problems across the country.

President-elect Biden: “There should be a national minimum wage of $15 an hour. No one working 40 hours a week should live below the poverty line.” https://t.co/HM56zeUPmw pic.twitter.com/xvaVDo2Bb3

The president-elect also emphasized his plan’s focus on helping small businesses and minority-owned businesses in particular, criticizing the Trump administration’s initial approach which he said favored the wealthy and well-connected.

He also pushed his plan for a mandatory federal minimum wage of $15 an hour.

“People tell me that’s going to be hard to pass. Florida just passed it, as divided as that state is, they just passed it. The rest of the country is ready to move as well,” he said. “No one working 40 hours a week should live below the poverty line. And that’s what it means. If you work for less than $15 an hour and work 40 hours a week, you’re living in poverty.”

President-elect Biden: “The very health of our nation is at stake… We will finish the job of getting a total of $2,000 in cash relief to people who need it the most.” https://t.co/s8IAVd0H4U pic.twitter.com/CEQPOjxYgy

He frankly noted the “bold, practical” policy he was putting forward did not come cheap but argued there was no option to act.

“I know what I just described does not come cheaply. But failure to do so will cost us dearly,” he said. “The consensus among leading economists is we simply cannot afford not to do what I’m proposing.”

Biden ended his remarks with a call for unity and optimism, referencing his inauguration on Wednesday as a “new chapter for the country.”

During his address Thursday, Biden announced his first joint session of Congress will take place next month, where he will address the second pillar of his recovery plan, focused on investments in infrastructure.

The president-elect praised Congress for working across the aisle to pass a COVID-19 relief bill in December, but reiterated his message that the package by itself was only a “down payment.” He said more is required, framing his policy proposal as the next step and urging lawmakers to push forward.

After blasting the current administration’s vaccine distribution plan as a “dismal failure,” Biden previewed his remarks Friday, where he plans on laying out his vaccination plan.

“We’ll have to move heaven and Earth to get more people vaccinated, to create more places for them to get vaccinated, to mobilize more medical teams to get shots in people’s arms, to increase vaccine supply and to get it out the door as fast as possible,” he said. 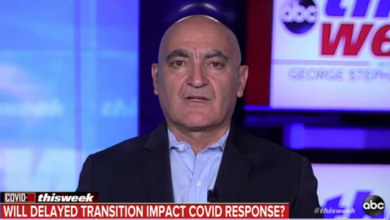 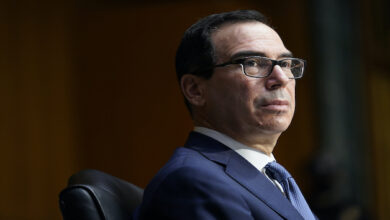 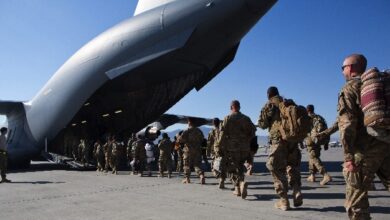 After 20 years, US ground troops leave Afghanistan, but Americans left behind 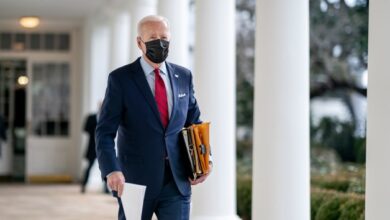