Jeff Swensen/Getty Images for “A Beautiful Day in the Neighborhood” Pittsburgh Special Screening(LOS ANGELES) — Joanne Byrd Rogers, the beloved wife of the late TV personality Fred Rogers, has died at 92.

“Fred Rogers Production is deeply saddened by the passing of Joanne Rogers,” the organization shared on Facebook and Twitter. “Joanne was a brilliant and accomplished musician, a wonderful advocate for the arts, and a dear friend to everyone in our organization.”

“We extend our heartfelt condolences to Joanne’s family and the thousands of people who had the privilege of knowing and loving her,” it added.

For 50 years, Joanne was married to Fred Rogers, the iconic TV personality behind the popular children’s TV show Mister Rogers’ Neighborhood from 1968 to 2001.

The couple, who married in 1952, met at Rollins College in Winter Park, Florida, where Joanne was studying music on a scholarship and Fred had transferred to from Dartmouth College. The two bonded over their love of music.

“Music meant a lot to both of us,” she said during an interview with TEDxPittsburghWomen in 2019. “We had that in common and we talked often of, ‘How do people live without music?’”

After her husband lost his battle to stomach cancer at 74 in 2003, Joanne continued to keep his legacy alive by sharing his messages of kindness and by serving as the honorary chair of the advisory council for the Fred M. Rogers Center for Early Learning and Children’s Media.

Joanne was also the chair emerita of the board of directors of Fred Rogers Productions, which was founded by her husband in 1971 and was aimed to create media for children. It was initially founded as Family Communications, Inc. 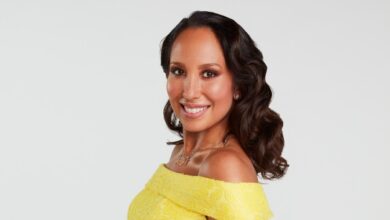 Cheryl Burke recalls the “shame” she felt after contracting COVID-19