Marvel Studios/Disney+(LOS ANGELES) — In a press conference on Sunday, Marvel Studios head Kevin Feige talked about Marvel’s upcoming Disney+ show WandaVision, and what it has to do with that other Disney+ show: the Emmy-winning The Mandalorian.

Feige explained, “We were all underway long before we saw The Mandalorian [but] there is lots and lots of [it] that has inspired us at Marvel Studios, not the least of which is the [set technology] that we’re using on some upcoming projects.”

He also admired Disney’s “event-izing” The Mandalorian, the first live-action Star Wars TV series, by releasing it on a week-to-week basis, rather than all at once.

On its surface, WandaVision is tribute to classic TV sitcoms, which is one reason why Family Matters‘ Jaleel White was the moderator at the press conference. But there’s something darker behind why and how Wanda and Vision find themselves on sets similar to Betwitched and The Brady Bunch.

That will become apparent as the series unfold. Meanwhile, Elizabeth Olsen appeared on ABC’s Good Morning America Monday, and confirmed that her character will appear in the upcoming big-screen sequel Doctor Strange and the Multiverse of Madness.

“There’s never much we can talk about in Marvel, but I do think that WandaVision is a natural progression into what happens in Doctor Strange 2,” she said.

She added, “I think Kevin Feige’s doing a really amazing job intertwining the television format with the films so that we can tell more interesting stories moving forward.” David Duchovny talks about the election night roller coaster, and getting political with new single 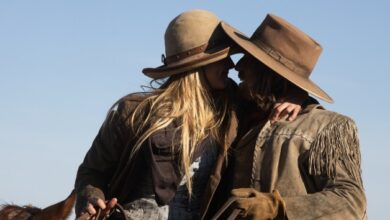 “Nobody is safe”: '1883' star Eric Nelsen talks THAT episode