Dimitrios Kambouris/Getty Images for Empire State Realty Trust(LOS ANGELES) — Online dating can be a hassle, just ask Drew Barrymore.  The mom of two revealed she waded back into the world of dating, but has yet to find success.  In fact, one bad date left her feeling humiliated.

Speaking recently on The Drew Barrymore Show with comedian Nikki Glaser, the actress confessed she joined a celebrity dating website “where every guy was a surfer, a photographer, had a dog… like a cookie cutter,” which meant she did a lot of swiping.

“I booked a date with one guy, like finally,” the 50 First Dates star revealed, but said the potential love connection was doomed from the start. “He stood me up at the exact time we were supposed to meet!”

Although her ego was bruised, Barrymore said she brushed off the slight and huffed, “I was like, ‘Can’t you be a jerk like an hour before?’ That would have been such a time saver!”

The two women tore into so-called celebrity dating apps, with Glaser joking that she refers to them as “DJs jumping off of yachts.”

Barrymore enthusiastically agreed, adding, “There are, like, big, high-powered men and of course I didn’t go for any of those.”

The actress also revealed a little about the man she was supposed to meet up with, revealing, “I was like, ‘Oh!  The comedy writer.  That sounds fun!'”

When Glaser proposed that the potential date was intimidated of Barrymore’s status, the actress corrected, “I think he’s just an uncourteous person.”

The Emmy Award nominee then advised the audience to never make excuses for a rude date, saying, “We gotta face the facts.” ‘The Bachelor’ recap: Emotions run high as a former contestant crashes the competitio 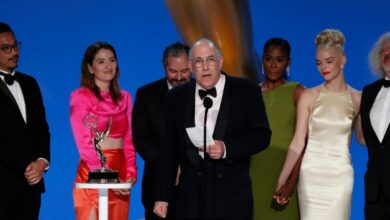