(NEW YORK) — Serena Williams is surrounded by powerful women in her life — be it her mother, Oracene Price; her sisters, including fellow tennis pro Venus Williams; or her daughter, Olympia.

“I’ve always been inspired by my mom, but I’ve never been inspired to the level that I am now,” Williams, 39, told ABC News’ Good Morning America of Price, 68, who is also her tennis coach. “I respect her so much more. Not that I didn’t, but I think when I had a baby, I relied on her more than I ever have. I never expected that, so that’s really cool for me.”

While she said all of her sisters are “amazing,” there’s no denying she shares a special bond with older sister, 40-year-old Venus, with whom she has won a total of 14 Grand Slam doubles titles.

“She’s so positive and she never stops,” Williams said. “She does so many things and she has more energy than anyone I know, but she deals with so much on a health thing that it’s so inspiring.”

Then there’s Olympia, whom the fashion entrepreneur welcomed alongside husband Alexis Ohanian in 2017.

“She’s always so happy,” Williams said. “You can learn this from kids, it’s like they don’t have a care. Sometimes we put too much emphasis on things and on stuff that we really just have to rely on us and just being happy. That’s very inspiring for me.”

Aside from these women, the tennis legend — who has 23 Grand Slam singles titles under her belt — said she finds inspiration in everyday women and recently partnered with Bumble to select five deserving women for the app’s inagural “Women of Courage” list.

The women selected include a teacher who has adapted to virtual teaching amid the pandemic, a nurse who has worked on the front lines in the fight against COVID-19 and other women who went above and beyond to lift up their communities.

“2020 was a very tough year for everyone; it’s been difficult — and with that comes a lot of courage,” Williams said. “The courage that we saw comes from everyday women — not people you automatically look up to or people that are posters on your wall, it’s really people for me that are either in your house or people next door to you that you can be inspired by.”

While the women highlighted by Bumble’s “Women of Courage” list have all done incredible things to stand out, the four-time Olympic gold medalist said it doesn’t take that to be considered courageous and sometimes “just literally getting up every day” is enough.

“You never know what people are going through and you never know the challenges they face,” Williams said. “I really feel it’s so important not to judge a book by its cover; it’s so much more on the inside and what’s on the outside.”

“So I think having resilience is something that really we all can relate to [this year],” she continued. “I’m really excited to lift these women up and let them have a voice.”

As the year comes to a close, Williams said she is setting “reasonable expectations” for 2021 because this year has shown her how things can change “in a blink of an eye.”

“It’s all just about positive energy,” she said. “I’m just looking forward to just hopefully having a better year but also just staying positive no matter what happens.” 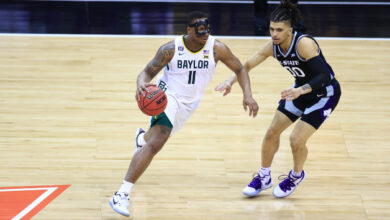