(NEW YORK) — Rebel Wilson is opening up about her past unhealthy eating habits and changes in her diet that have helped her shed close to 40 pounds.

In a recent candid conversation with People, the actress explained she wasn’t eating properly.

“Before I was probably eating 3,000 calories most days,” Wilson, 40, shared. “And because they were normally carbs, I would still be hungry.”

The Australian star, who is a few pounds shy of hitting her goal weight of 165 pounds, says she has completely transformed the way she eats.

“I’ve really changed to eating a high-protein diet, which is challenging because I didn’t used to eat a lot of meat,” Wilson detailed. “I eat fish, salmon, and chicken breast.”

However, the actress insists she’s not miserable on her new eating plan because it’s all about balance. In addition, she maintained she isn’t obsessing over her new diet, either.

“It doesn’t mean every week is a healthy week,” the Pitch Perfect star insisted. “Some weeks are just write-offs, and there’s nothing you can do about that.”

“I have this state of being, which is not my quote, but I go, ‘Nothing is forbidden,'” she continued. “We’ll be like, ‘Should we get In-N-Out burger?’ And I’m like, ‘Nothing is forbidden.’ I can go there, I just might eat half of what I used to eat before, you know? And I’ll have a burger, and a few fries, and then you feel fine.”

Wilson said she’s been working on her mental health, too, adding that quarantine has allowed her to reset and reflect.

“I really took it as time to get really well-rested and de-stress,” said Wilson, who also said quarantine allowed her to finally exchange her “bad habits to healthier ones.” 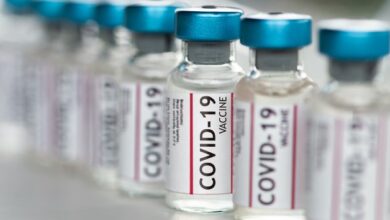 CDC updates guidance on disinfectants vs. soap to stop COVID's spread on surfaces