ABC/Eric McCandless(LOS ANGELES) — With the semifinals kicking off next week, no one was safe from elimination on Monday’s Dancing with the Stars.  While some competitors shined on the ballroom floor, others stumbled under the intense pressure to impress the judges and break away from the rest of the competition.

Once again, the stars were given a week to master two routines.  Unlike the previous challenge, which came in the form of a relay, competitors had to perform against one another in a high octane dance off for two extra bonus points.

Despite winning their respective dance off and earning those needed points, AJ McLean failed to make the semifinals and was forced to hang up his dancing shoes.

McLean’s journey was cut short due to a disastrous Viennese waltz to Queen’s “Somebody to Love,” which started out strong but was derailed by a misstep.  The 43-year-old was unable to recover and scored straight sevens.  Despite bouncing back against Johnny Weir in their jive dance off, the two bonus points did nothing to spare him from being sent home.

The Backstreet Boy found himself in the bottom two — shockingly — alongside Weir, who achieved his second perfect score of the season.   All three judges expressed dismay over how the audience voted, but ultimately decided that the figure skater accomplished more progress and, thus, opted to save him once again from being sent home.

As for the competitors who rose above the curveball of having to dance against another contestant, one example was One Day at a Time star Justina Machado.  Her first dance, a rumba to “Crazy for You” that doubled as a tribute to Madonna, showcased a softer side to her normally bold and brazen dancing style.

However, Machado brought the spice back ten-fold when dancing the cha-cha against Kaitlyn Bristowe.  The actress clinched those two extra bonus points, which allowed her to finish the night with a 26 out of 30.

Also winning her respective dance off was Disney Channel star Skai Jackson, who went toe to toe against Nelly.  Her clean and precise salsa outshined the “Hot In Here” rapper, earning her two extra bonus points that pushed her to second place with a score of 29 out of 30.

Weir and Bristowe tied at the top of the leaderboard on Monday night as both earned straight 10’s for their respective routines.

Kailyn dazzled with her “Toxic” Argentine tango that honored Britney Spears while Weir embraced Amy Winehouse’s unique flair for his quickstep to “Valerie.”

Lastly, while Nev Schulman was given immunity from participating in the night’s dance off because he had the season’s highest cumulative score, that didn’t stop him from baring his all on the ballroom floor.  The Catfish host tied with Jackson with a 29 out of 30 thanks to his joyful and stylized jive to Elton John’s “Saturday Night’s Alright (For Fighting.)”

With a narrowed competition paired with a volatile audience vote, even the judges don’t know who win this season’s Mirror Ball Trophy.

Find out who survives the semifinals when Dancing with the Stars returns next Monday at 8 p.m. ET on ABC.

Here are the current standings: 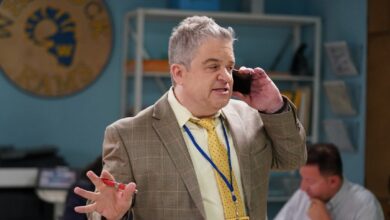 Patton Oswalt on the “sweet relationship” at the center of 'AP Bio', and the show's insane shipping episode 'The Talk' cast put on hiatus after Piers Morgan segment; Sharon Osbourne says she was “blindsided”